At the G7 summit on June 26-28, the United States intends to make a proposal to increase pressure on Russia. Washington also intends to call for consideration of new measures to support Kyiv. NATO Secretary General Jens Stoltenberg said he recognizes Russia as the main and direct threat to its security. The Azovstal plant in Mariupol should continue to work in the future, said Russian Deputy Prime Minister Marat Khusnullin. We are talking about turning the plant into a “resting place” or an industrial park. Vladimir Putin signed a decree on the temporary procedure for fulfilling obligations under Russia's foreign currency debt. Read online of the previous day of the special operation here. 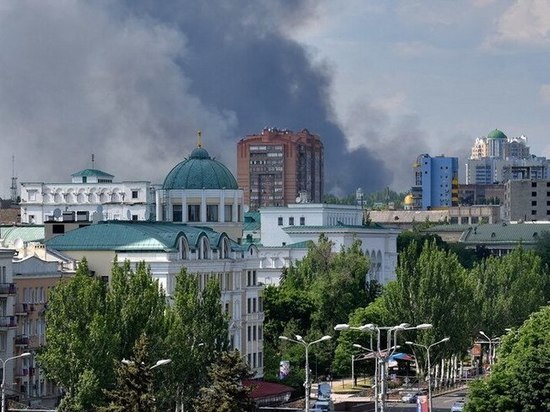 12:38 The Ministry of Finance of the Russian Federation reports that it has paid coupons in rubles on two issues of Eurobonds maturing in 2027 and 2047 for a total amount of 12.51 billion rubles. In addition, payments on Russian Eurobonds will be transferred at the exchange rate of the ruble to the nominal currency set by the Central Bank on the date of payment.

12:35A new briefing of the Ministry of Defense of the Russian Federation took place. It is reported that on June 22, the Russian Aerospace Forces destroyed 49 tanks with fuel for the equipment of the Armed Forces of Ukraine. Also, up to 50 MLRS combat vehicles located in the hangars were liquidated.

According to the official representative of the department, Igor Konashenkov, the Armed Forces of Ukraine continue to suffer significant losses. So, in the units of the Ukrainian 30th mechanized brigade, less than 50% of the personnel remained. And the air defense systems of the Russian Federation destroyed 21 Ukrainian drones in a day, chasing those that were near Snake Island.

Russian Aerospace Forces hit three bases for the repair of armored vehicles in the Nikolaev region, as well as four command posts of the Armed Forces of Ukraine with high-precision weapons.

Konashenkov added that Russian aviation, missile troops and artillery destroyed more than 650 nationalists, and three more MLRS vehicles ” Tornado” APU. At the same time, eight Ukrainian MLRS platoons were hit by high-precision weapons in the Donetsk direction in a day.

During the day, air defense systems intercepted a Tochka-U missile in the Kharkiv region, and another 22 Ukrainian MLRS shells, including over Zmeiny Island .

12:30London also banned the supply to Russia of jet fuel, goods and technologies related to work at sea, oil and its processing, as well as chemical and biological weapons and critical industrial technologies .

12:15 Britain has imposed new sanctions against Russia. They include a ban on the export and use of pounds sterling and banknotes of EU countries in the Russian Federation.

12:08It became known that the case against Medvedchuk on charges of treason will be heard in a Lviv court behind closed doors. The date is not yet known.

11:55The Vedomosti newspaper reports that assistants to State Duma deputies are strongly advised not to leave the country, including on vacation. According to the interlocutors of the publication, when applying for a vacation, assistants are required to “manually write on the form that” vacation abroad is not planned. “

11:35 The Prime Minister of Albania urged Ukraine not to have illusions about the status of a candidate for the European Union. According to him, “North Macedonia has been a candidate for 17 years, if I'm not mistaken, Albania – 9”.

11:20The heads of Moldova and Ukraine Maia Sandu and Volodymyr Zelensky discussed the recommendations of the European Commission on the application for EU membership. As the Moldovan leader pointed out, they are “committed to strengthening our cooperation regarding integration into the EU.”

11:04 Turkish Foreign Minister Mevlut Cavusoglu said that he had informed his British counterpart Liz Truss about the ongoing Turkey is taking steps to create a “grain corridor” with Ukraine.

10:22Deputy Chairman of the Security Council of the Russian Federation Dmitry Medvedev notes in his Telegram channel that there are no politicians of the level of Helmut Kohl, Jacques Chirac or Margaret Thatcher left in Europe. According to him, they personified a powerful course, and sometimes an entire era. But they were replaced by “a stunted growth of people who conventionally call themselves technocrats.”

“Mario Draghi is not Silvio Berlusconi and Olaf Scholz is not Angela Merkel…” he added. Medvedev is sure that “the problem of the degeneration of European politics is primarily due to the fact that it has become a pale backing vocal of American soloists.”

“This creates problems not only for the Western world, but also for us, Russia. The caliber of politicians decreases irresistibly. As Vladimir Putin once aptly remarked, “after the death of Mahatma Gandhi, there is no one to talk to,” Medvedev wrote.

10:14According to The Telegraph, British mercenary Aiden Aslin, who fought on the side of the Armed Forces of Ukraine, is waiting for the most severe sentence. At the same time, he claims that the British government did not even try to negotiate with Russia on his release.

10:04 The Greek edition of Proto Theme reports that Europe will have to return to coal and prepare for a harsh winter. It is likely that Moscow will completely cut off gas supplies to European countries.

10:00 NATO Secretary General Jens Stoltenberg said that he could not guarantee that Sweden and Finland would soon become members of the North Atlantic Alliance.

9:55The head of the Transnistrian Foreign Ministry states that the unification of Moldova and Transnistria is practically impossible, since they have different values ​​and different identities. At the same time, Chisinau is doing everything to create tension between Moldova and Pridnestrovie.

It is also noted that the situation in Pridnestrovie remains tense after a series of terrorist attacks.

strong>Deputy head of the military-civilian administration of the Kherson region, Kirill Stremousov, claims that Ukrainian troops have no chance of regaining control over the region.

9:41 The German authorities fear that the Russian Federation, as part of the annual maintenance of Nord Stream, may completely stop gas supplies. The Financial Times writes about this.

9:38 The Czech authorities have decided that they will not issue visas and temporary residence permits to citizens of Russia and Belarus until the end of March 2023. However, this does not apply to humanitarian visas.

9:36The Russian Investigative Committee opened a criminal case against a Ukrainian officer who ordered shelling of civilian targets.

9:32 The Russian economy will begin to grow in 2023. This will come after a decline of 8.2% in 2022, as stated in the new macroeconomic forecast of the Analytical Credit Rating Agency.

9:18A case has been initiated against Maxim Galkin in Russia on suspicion of extremism. Blogger Gaspar Avakyan wrote about this on the VKontakte social network. He complained to the Center for Combating Extremism of the Main Directorate of the Ministry of Internal Affairs of Russia for the Rostov Region about a humorist. The cause of the complaint was the “false statements” of the showman in relation to the Armed Forces of the Russian Federation. After that, a criminal case was initiated against the comedian.

9:14LNR Ambassador to Moscow Rodion Miroshnik said on his Telegram channel that units of the Lugansk People's Republic had established control over the only route linking Seversk and Lysichansk. According to him, the Ukrainian group of five to seven thousand Ukrainian militants in Lisichansk is now cut off from supplies.

9:10 Bulgarian Prime Minister Kiril Petkov resigned. This happened after a vote of no confidence was passed to him and his government. At the same time, he blamed the incident on three Bulgarian politicians and Russian Ambassador to Sofia Eleonora Mitrofanova, writes Novinite.

9:03Japanese parliamentarian Muneo Suzuki said that Kyiv is responsible for the failure to comply with the Minsk agreements. According to him, Vladimir Putin was forced to launch a special operation in Ukraine in order to protect the interests of his state.

Meanwhile, the forces of the LPR stopped an attempt to break through the Armed Forces of Ukraine in the Lisichansk direction. They also said that the Ukrainian group Gorskoye-Zolotoye fell into the boiler. In the near future, the grouping of Ukrainian troops in the area of ​​Lysychansk and Severodonetsk will also be surrounded, as well as the grouping in the area of ​​Gorsky and Zolote.

Russian President Vladimir Putin signed a decree on the temporary procedure for fulfilling obligations on Russia's foreign currency debt. The head of state instructed the government to select banks within 10 days for payments to holders of Russian Eurobonds under the new scheme.